I have mentioned earlier that I have been feeling extremely grown up this summer. I go to work. I make food. I wear real pajamas (that’s a grown up thing, right?). I do laundry in a machine that does not necessitate the use of coins. I hang out with my friends upon occasion, but very rarely. I spend a lot of time at the dinner table, chatting with Jasmine and Sierra a la Friends. During one of our conversations, we decided that we should have a dinner party which became a tapas party (Tapas con Hapas or what Sierra suggested: Tapas con Hip-Hapas) which became what we ultimately called the Madison Mixer.

Is there anything more grown up?

Thank you to Pinterest for all the inspiration for our menu. We were initially over-ambitious. We wanted to make three beverages, about nine tapas, and a dessert. For approximately fifteen people? Yeah, that would have been too much. We cut our selection down to: one beverage, four tapas, and one dessert. Much more reasonable.

Just for those of you who are interested in checking out the recipes that we followed, they are as followed: Watermelon Aqua Fresca, Mini Spinach Lasagna Roll-Ups, Berry Oats Cookie Cups, and Strawberry Cheesecake Mousse. Sierra recently purchased a car which made grocery shopping ridiculous easy. I’m really proud to say that each of us only spend $33 to put together the event. Once we got back home from the grocery store, the cooking began. In the hour crunch before the event, we started worrying about (1) whether people would show up, (2) whether or not there would be enough food if people did show up, and (3) whether or not people would have a good time.

Diamond and Priscilla made a peanut butter salad  and Rose made peanut butter cookies which made us less worried about whether or not there would be enough food. 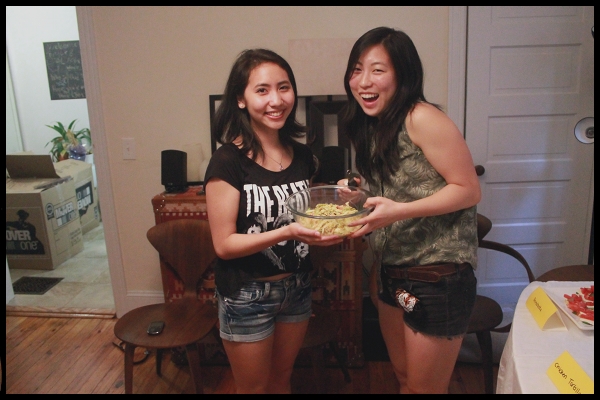 Around 7:30, all the guests poured into the house. We had great music, great food–if I say so myself, and an extremely good time. Preparing for the event was such a bonding opportunity for Jasmine, Sierra, and myself. We worked in our cramped kitchen for a period of about six hours. I think there was a point when we were thinking: “what have we gotten ourselves into?” Ultimately, we had an amazing time.

This may sound wild, but we’ve recently drafted our proposed menu for our fourth of July event. Think: apple pie and hamburgers and much, much more. Are we getting too ahead of ourselves?

2 thoughts on ““Growing up is a terribly hard thing to do. It is much easier to skip it and go from one childhood to another. ” ― F. Scott Fitzgerald”